Milk - Raw vs Pasteurized which is better

INTRODUCTION
During the early 20th century, Foodborne illness became a bigger issue. Milk as we know is a perfect meal, but at the same time milk is highly perishable item and due to this it caters a perfect environment for the growth of the microbes.
Due to Industrialization and urbanisation more and more people moved towards the cities, moving away from the source of the food; thus, it become more important to preserve milk and food commodities in general.
In context of this preservation techniques were made, one such technique is PASTEURISATION. Pasteurisation was developed to preserve the beverages in general and this technique is widely used to preserve the milk.
This however has led to debates among the masses whether to consume treated milk or not. I personally belong to the group of masses that promotes the consumption of treated milk and I highly recommend drinking only pasteurised milk.

DISSCUSION
A simple click on the browser and one can see number of articles and blogs explaining how pasteurisation degrades the quality of the milk, but none of the claims made in the blogs or articles are backed by enough science, findings and experiment.
In this writing I have tried to Shatter some of the popular beliefs by those who promote the consumption of raw milk.
RAW OR HEATED MILK a study published in Food control journal, gives the nutritional components present in raw milk and pasteurised milk. It can be seen from the table 1
That there is no change in the macronutrients (proteins, carbohydrates and fats) but however the micronutrient (vitamin B6, folic acid, ascorbic acid) are reduced a small fraction. A fraction so small so be taken into consideration the only compound lost in pasteurisation is vitamin C but milk is not a good source of the above said vitamin.
The table and the study shows that the claims made by those promotion the benefits of raw milk over pasteurised milk can be refuted.
The only changes occurring in milk pasteurisation are sensory  colour and taste. 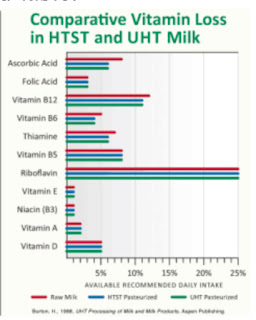 Table 1 showing the composition of Raw Milk and Pasteurised Milk (UHT and HTST). Taken from the study ‘RAW OR HEATED MILK OF COW’.

Second claim by the masses supporting the consumption of raw milk is that due to pasteurisation taste and flavour components of the mil are lost and thus the raw milk is tastier, but frankly taste is subjective and in order to make people consume raw milk  intentionally just to compare its taste with pasteurised milk would be ethically wrong thus this claim is not backed by enough science . In my opinion and this is a personal opinion the taste difference is due to homogenisation, as the raw milk has bigger globules of fat and this contributes to richer and fuller taste.

The third and one of the most popular debateable claims made by those who use raw milk is that raw milk has a decent titter of probiotics and believes that this makes the milk healthier. In the consumer survey the raw milk drinkers often cites ‘Good bacteria’ or ‘Probiotic’ as the most important factor to choose the raw milk. The WHO definition for probiotic is ‘LIVING MOCROBES WHEN ADMINISTERD IN ADEQUATE AMOUNT CONFER A HEALTH BENEFIT ON THE HOST.’[who.com] the producers always promote raw milk as a good source of probiotic, but however there are no studies showing that claims meet the requirements. In fact the milk from a health mammal is sterile when it leaves the mammary gland, so a good quality (grade A) raw milk handled with proper sanitization and production using the hygienic technology should have hardly any microbes. However when the milk passes through the skin or teat it may pick up some microbes, still not enough to be called PROBIOTICS.

October 19, 2021
Veganism is the most effective way to combat climate change. A popular slogan used by proponents of the vegan diet. One click on the internet and you can see Hundreds of headlines and news articles saying how huge chunks of Land are cleared everyday to make areas for Cattle farming and grazing. As a result, a movement known as veganism has emerged.In dietary terms it means abstaining from all products derived partially or wholly from animal sources ( The vegan Society ) .  Veganism started as a fringe movement but in a short period of time it gained momentum and is mainstream now. Vegan or Veganism is usually a philosophy and way of living which seeks to exclude—as far as is possible and practicable—all forms of exploitation of, and cruelty to, animals for food, clothing or any other purpose; and by extension, promotes the development and use of animal-free alternatives for the benefit of animals, humans and the environment.  Vegans are frequently seen arguing that
Post a Comment
Read more